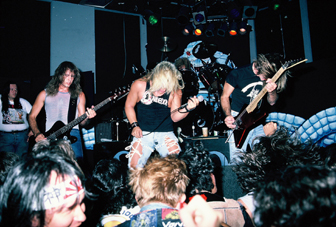 Distinguished opinions hold that falling back on traditional verse-chorus musical formats keep heavy metal back from realizing its potential. That seeking recourse to blatantly embedded hooks and simple song structures is playing to the galleries and pandering to the lowest common denominator. That metal, or at least the extreme variants, has long since escaped the populist constraints amidst which it was birthed and should always strive for a more classical ideal.

These are valid arguments in many cases; after all the casual listener and the dilettante’s attention span can only handle so much input and so it chooses to focus on the most obvious and the most easily decipherable. Pop music fans have different priorities with regards to what they look for in music and, perhaps not entirely of coincidence, in life. They are usually not prepared to allocate the time or space for the kind of abstract agonizing that metalheads are so gleefully prone to. It seems logical, and practical, then that they only consider music as a background pleasantry or a social lubricant. To cater to this set, as many once-lauded metal bands have through the years, would indeed be an act of willful self-castration, and one that heavy metal should always stay wary of.

But is a bone-dry, academic analysis of heavy metal always possible? Do we simply sign away and dismiss nearly every traditional metal band as settling for pop-rock ethics because they have conformed to traditionally popular ideas of what constitutes a song? In many ways it is easy to recognize and dissect extreme metal, just because of its unconventional and often non-linear musical qualities. But simple heavy metal cannot be so readily quantifiable.  Heavy metal, as contradictory as it may sound and albeit for different reasons entirely, inspires the same kind of ineffable awe that religion evokes in the devout. It is an upswelling of sheer, undiluted feeling that sees past mere surface markers and communicates a logic all of its own making. Bands since the beginning of the genre have tapped into this undefinable source of energy while retaining utmost care for writing songs with an inherent quality check that could potentially appeal to a wide but also discerning audience. To deny this facet of heavy metal’s history is to kill a little bit of its mystery and is behaviour inconsistent with the same things we hold dearest about this style of music.

The following song illustrates this better than words ever could: