Monstrosity – The Passage Of Existence (2018) 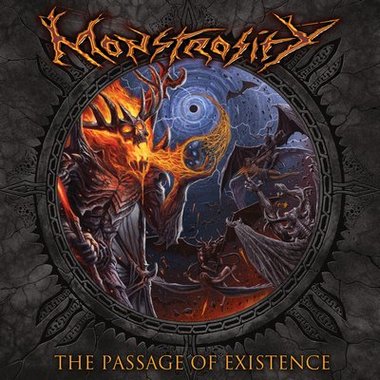 While Monstrosity albums from the 90s are true genre staples, it wouldn’t be unfair to say that the band have come to be so well-regarded by the underground as much for staying out of the spotlight as they have for their music. One hopes the underground detests attention whores and prima donnas; Monstrosity have been anything but, making appearances without undue fanfare and then disappearing as inconspicuously leaving well-wishers in a state of perpetual speculation. But with years falling away like so many leaves in between albums, one wonders about the muse that has motivated Lee Harrison & co. to assemble the current batch of songs. With time comes even greater technical proficiency and hopefully wisdom too but is such protracted pensiveness really beneficial to a music as spontaneous as death metal?

The Passage Of Existence is not as intimately confrontational as the band’s first three full-lengths. It does not contain the speed-drenched rhythmic violence of Imperial Doom, a quality that saw the band making hairpin bends in songwriting without missing a beat, or the sheer bullish swagger of Millenium. In Dark Purity introduced more deliberate melodic phrasing that helped the band move beyond its formative influences in Slayer into an altogether more menacing direction. On this album, Monstrosity wrote legitimately epic, technical death metal as opposed to mere spidery exercises in adrenaline, using contrasting textures to embellish the struggle between light and dark.

Rise To Power continued in the same general vein as In Dark Purity, perhaps even upping the intensity, but while being serviceable for its time and a near replica of the previous album’s breathing patterns, it is not blessed with the same meaning; the cadences have lost their metaphysical significance and verge on the gratuitous, much like any other album from this shapeless, forgotten period in death metal history. Spiritual Apocalypse, notwithstanding token efforts at variety through a new vocalist, some melodeath riffs, and extravagant but out of place guitar solos, ultimately followed Rise To Power‘s lead, in an unfortunate trend of diminishing returns.

The Passage Of Existence drops belatedly into this staggered timeline, retaining much the same line-up from Spiritual Apocalypse. Obvious immediately is the greater attention to individual song theme, something sorely missing on the previous two albums. The band achieves this identity partly through a juxtaposition of traditional death metal dissonance with heavy metal overtures, an unlikely marriage at first but which in the grand telling creates unified and even evocative narratives. As expected, rhythm guitars are intricately syncopated, dripping with melodic information and often in harmony during riff refrains. Lead guitar, however, is frequently given over to overt 80s Shrapnel Records-style acrobatics, and while one can admire the skill required to play these parts, acknowledge the role of the lavish guitar solo in bands as diverse as Immolation, Brutality, and Intestine Baalism, Monstrosity in an effort to accommodate these technical showcases shift the chord bed below them in undesirably saccharine directions.

Which is unfortunate, because these are well-written songs capable of standing on their own with minimal embellishment. Floridian death metal, gritty as it can be, has never shied away from instrumental flash, but there still is a fine line to be toed in terms of preserving the mood of the song. Monstrosity, like old Kataklysm, even make the enhanced melodicism work at the level of the riff, but ideally should have exercised more control over the lead guitar’s contributions in the studio.

This entry was posted in Death Metal and tagged MOnstrosity, the passage of existence. Bookmark the permalink.