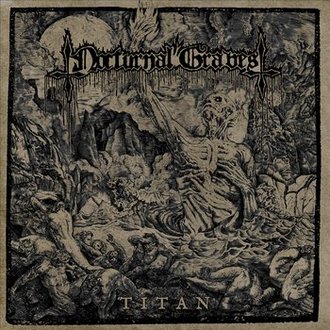 Nocturnal Graves‘ move to Season Of Mist and their subsequent change of style to a more sinister and restrained blackened death might make many cautious. A scroll down the label’s current roster reveals genre epithets like “post”, “sludge”, “progressive”, and “grindcore”; not exactly the most reassuring of havens for a band that made a name for themselves previously at those bastions of bestiality and a good time, Nuclear War Now! and Hell’s Headbangers. Even past worthies like Gorguts, Morbid Angel, and Destroyer 666 didn’t exactly cover themselves in glory after relocating here, so what chances that Nocturnal Graves could beat the odds and make this change for the better?

Opener ‘Resistance‘, palpably intended to be the showpiece of the band’s new approach, also inadvertently demonstrates the flaws that it can be prone to. Two notes separated by half a step are alternately and descendingly picked in drawn out manner – as opposed to a band like Immolation bending a note up or down the same interval in their storied outros – to suggest portent, but the song then develops independently of this theme until it is picked up again as an afterthought and as a bookend and an epilogue. The riffsets in between aren’t parts of an organic whole either but instead are self-contained, living and dying in the time that they exist, imparting no energy to the next part. To make matters even more inaccessible, the serrated, up-down nature of notes from which these riffsets are composed leaves the song without any hint of a naturally building crescendo or resolution.

Somewhat improbably, however, the band then course-corrects, primarily by reverting to type; a more ravaging, up-tempo breed of black/death, a healthy amount of groove, and the atmospheric lead guitar contributions of Shrapnel, formerly of Destroyer 666, all help to make the remainder of the album a little more tight-knit. Willfully, Nocturnal Graves rein in variation for the sake of variation, in favor of the phrasal-cyclical development of Morbid Angel and Angelcorpse and the utility of the lead guitar as a mood-setting device. The result eschews linear narrative for the form of a serpent swallowing its own tail, but unlike the clunky attempts at closure heard on the first song, there is a veritable loop-like logic to the music; Titan can now be enjoyed on its own terms, in the tonally restricted space that it exists, perhaps as a more varied cousin of Diocletian‘s Gesundrian.