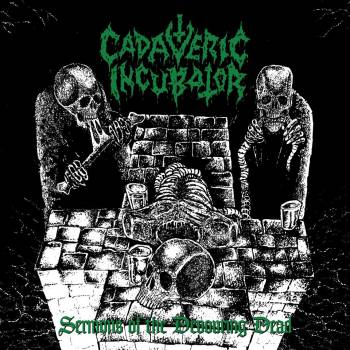 I retain more than a passing affinity for early Cannibal Corpse and goregrind at large; make of that as you will, but Finland’s Cadaveric Incubator proudly revive the diametric opposite of today’s self-serious and frankly ridiculous war metal; meaning, at its most frenzied, Sermons of the Devouring Dead grinds like a motherfucker, but not without a sense of structure and mood. Melody is never as overt as on, say, Lymphatic Phlegm‘s classic Pathogenesis Infest Phlegmsepsia, but, like clockwork, through cloudbursts of low-end assault emerges a lead or a harmony to lend humanity, psychotic as it may be, to this ruckus. The term may have been hijacked for moralistic purposes, but for the sake of sanity, for the sake of avoiding disillusion, “humanity” remains better thought of as a colorless and odorless quantity, as encapsulation rather than exaltation of what it means to be human.

In all ways, this album harks back to developments that occurred in this niche until the turn of the millennium; political incorrectness may not be its calling card, but isn’t it a sad indictment of what the metal underground has become that one even thinks of using political incorrectness as a parameter for judging a band’s sincerity and extremeness? It wasn’t always like this; bands were evaluated on whatever they evoked in the abstract, in the there and then, and that was usually the end of it. Were all of us simply insensitive jerks fetishizing of raping our female friends in the ass?

I don’t think so, and I very much suspect Cadaveric Incubator belong to the same school, of not giving a fuck nor assuming responsibility for an entire milieu’s conscience-farming. Prepare a bill containing them, Embalmer, and Cardiac Arrest, and I can virtually guarantee them attracting for the most part only the most dyed-in-the-wool and disenchanted of metal listeners; not through any great claim to narrative prowess or innovation but by sheer dint of a sonic force and aggression unfashionable to the herd mind because it has nothing of the extraneous about it.

Like the most memorable grindcore, Cadaveric Incubator write songs with distinctive bookends. In between lies furious activity; short-length riffs arranged in iterative formation which in toto add up to something a little more than Scum but a little less than Harmony Corruption. In other words, like the Nasum demos, Cadaveric Incubator straddle the breadth of an early death/grind underground, influenced equally by Cannibal Corpse and Death, by Earache’s brutality, and by altogether more extreme references in European goregrind like Xysma, Regurgitate, and Haemorrhage.