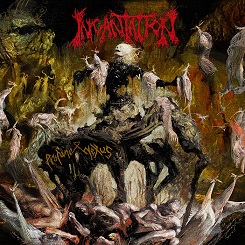 Perhaps the most significant thing about Profane Nexus is the presence of ‘The Rites of the Locust‘. Here, Incantation take aim at the global pestilence of Islam, thus becoming one of the few established underground bands to avoid the honey trap of political correctness. Never a band for sensationalist haranguing outside of their distaste for Christendom, Incantation seem to have realized that the world today is a vastly different place from that of thirty years ago. Europe is mired in policies which pay scant heed to the tide of history; but why only Europe? even my country of birth, with its almost millennium-long record of persecution under the scimitar, contains a class only too happy to sidestep reality, instead choosing to sing paeans to Urdu and the tandoori kabab. The wolf has been welcomed to the hearth, his depredations patronized with a strange mixture of guilt, ignorance, and self-mutilating sophistry. Any awakening to come, if it comes at all, will in all likelihood have come much too late. May these charlatans’ womenfolk be the first to be made to don the niqab when that glorious day arrives.

How does Profane Nexus fare as a new Incantation album in 2017? The question is a loaded one, because of how hard it is for this band to diversify with purpose at this late date. With due fairness, they try; they have been trying ever since Primordial Domination with its shorter song forms and subtle references to Autopsy. Goreaphobia‘s Alex Bouks brought a heightened speed metal aesthetic and a very real sense of melody to Vanquish In Vengeance; these developments found even more pronounced space on Dirges of Elysium, the band’s most conscious attempt at innovation since their 90s heyday. The experiment wasn’t always consistent, but as a work in progress it could be treated on its own terms.

Profane Nexus occupies a niche between Vanquish in Vengeance and Dirges of Elysium. Bouks has departed since, but his lessons haven’t been forgotten; rather Profane Nexus integrates those techniques within its fold whilst reasserting a more trenchant identity. On either side of the tempo spectrum, this album contains some of the most extreme music the band has ever written; that is not a comment on quality, simply an observation. Incantation‘s slow parts have always verged on sludgy, Esoteric-style funeral doom and that tendency is taken to its conclusion here; on the other hand, a couple of songs in the middle bring to mind the simple-minded bludgeoning ferocity of death/grind like Embalmer. The band has ever teetered on such precipices; Profane Nexus is a culmination of those violent tendencies.

The primary complaints leveled against modern Incantation are an overt dependency on speed metal-style chugging between chords, and a general rambling shapelessness that has crept into the songwriting. The latter still manifests itself during the dedicated slow songs; however, the speed metal aspect, if one is inclined to view it as a negative, is reined in greatly. At all events, there is more than enough evidence here to suggest neither of these issues are chronic in nature; Incantation still retain the bulk of their angularity and harmonic intricacy, features that set them apart from virtually every other band plying these waters.