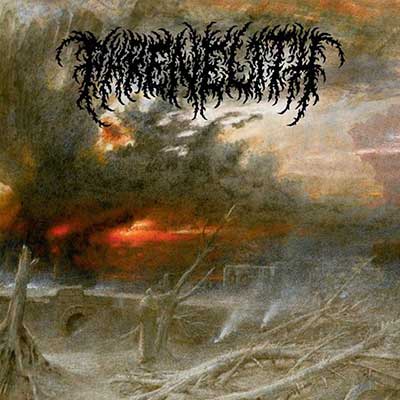 As Incantation slide further into impressionistic senility, Phrenelith appear on the scene seemingly well-equipped to carry the baton forward. Techniques from that school are found in abundance on Desolate Endscape, be it the scaffolding riff lines rooted in chromaticism, the natural harmonic punctuation, or the trademark crawl. But this album also boasts a loose and organic character which differentiates it from a blatant derivative like Father Befouled. It’s almost as if at any given time Phrenelith forget that they’re supposed to strictly adhere to the style in vogue, breaking out into more heightened self-awareness. Their melodic palette is a little “brighter” than their ancestors, with phrases occasionally referencing European forms of death metal; in this, they are similar to the underrated Deteriorot who used much the same foundation to make imposingly dark melodic death metal of a unique character.

Phrenelith get the stuff of this style; in particular, they understand the use of repetition at both slow and fast tempos. A musical device routinely abused by lesser bands, repetition hinges chiefly on placement and duration. Both qualities in turn revolve around song-sense and restraint. Phrenelith throw a nod in the direction of Immolation‘s heralded album finales from yesteryear, but they also bring to mind the Pete Sandoval-fueled grinding battery of Altars of Madness; the latter, placed in the main body of the song, imparts tremendous, hypnotic forward momentum to the music.

Incantation themselves, in their pursuit of the doomier end of dynamics, have greatly missed this sense of feverish activity since The Mortal Throne of Nazarene. Phrenelith, though, have learned well the lessons of the past; theirs may not be the intense, call-response dialectic of Morbid Angel; instead, like Incantation, Phrenelith build riff line upon riff line in what amounts to an ever-probing soliloquy, a broadcasting organ that uses the culmination of what has gone before to build anew.