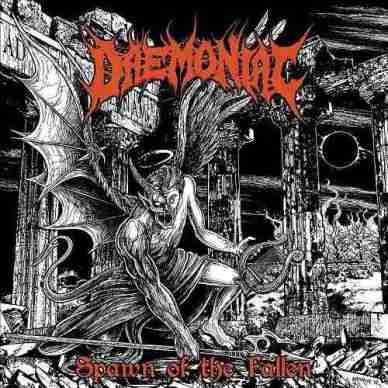 Daemoniac from Italy release a galvanizing, no-bullshit death metal debut in Spawn Of The Fallen. An album that initially seems marred by atrocious production on the cymbals gradually works its way in by strength of character and composition; midway through, all reserve is abandoned in face of Daemoniac‘s non-stop barrage. Some might accuse the band’s single-note agenda of monotony, but what death metal fan, or black metal fan, has not tired of albums lapsing into new-age territory while using variety and innovation as excuses?

It is refreshing then to hear a new death metal band assemble an album from trusted influences: the guitar resembles the serrated edge of old Nihilist and Carnage recordings, the riffs frequently showcase the frantic, punk-like transitions and singly-plucked discombobulating melody as tool of segue and drama, symptomatic of Scandinavian death metal. Songs are strictly segregated into bars, with each riffset repeating  for a specified number of times. This is death metal convention, escaped with success only by the most intrepid and talented; Daemoniac aren’t adventurous in this regard, but they are smart and well-schooled in tradition. Their riffsets alternate between assuming a call-answer aesthetic (see Altars Of Madness), and a ramming hammer-phrase which reiterates time and again to force the issue and set the stage for ensuing movement. So, while textural variety and intricacy in riff-work are at a premium, Daemoniac excel at the cumulative process of song-building in an unrelentingly hostile paradigm.

This entry was posted in Death Metal and tagged Daemoniac, death metal, Italy, Spawn of the Fallen. Bookmark the permalink.