Death Metal Battle Royale Round 1: Gorguts’ The Erosion Of Sanity vs Atrocity’s Todessehnsucht 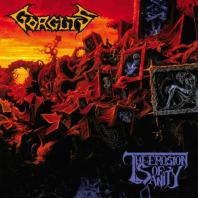 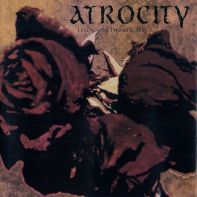 Impressionistic appraisal: Gorguts’ The Erosion Of Sanity (1993)
A Dan Seagrave drawing depicts H.R. Giger’s varmints in some kind of interdimensional, cubist snapshot, transposed on a familiarly dystopian landscape. Seagrave’s canon is the stuff of death metal legend, forming links to benchmarks of the genre every bit as essential and representative as the music itself. The Erosion Of Sanity is Gorguts‘ magnum opus, moving farther away from their Death (Leprosy) -inspired debut into one of the most natural alliances between technical prowess and old school savagery.

Analysis: Gorguts’ The Erosion Of Sanity (1993)
The Erosion Of Sanity is dreamlike in how its narrative unfolds. Technically intrepid like few death metal albums till that point, or since, it is fascinating to hear the poetic rhythm that these songs hold. Gorguts are masters of the broken riff, where a phrase is interrupted in the middle of its natural progression by angular shards of rapid activity, before being rejoined for its logical conclusion. Achieved through virtuoso, off-beat percussion, and the fast switching between alternate-strummed notes at half-tempo, this technique creates a peculiar, river-like effect, where momentum ebbs and flows but is never fully stanched.

To those who consider death metal an amelodic music, The Erosion Of Sanity gives a fitting riposte, proving how melody in death metal can indeed be made out of unconventional note choices in dissonant arrangements. Gorguts practice incremental progressions in tone between adjacent chromatic passages. These are all but undiscernible in their micro-shifting of textures, until the movement is revealed in its entirety, usually punctuated with a more readily identifiable hook or refrain serving as the song’s identity. The focus, in all cases, is on an unorthodox approach to harmony, where the lack of tonal centers does nothing to deter this music from having a fierce and undeniable musical logic.

Impressionistic appraisal: Atrocity’s Todessehnsucht (1992)
In one word: daunting. Everything about Todessehnsucht poses an intellectual gauntlet to the listener, regardless of his experience, with death metal or with this album, itself. A serious album in every aspect conceivable, much like debut Hallucinations, Todessehnsucht remains a proud pillar of the technical death metal movement. The two signifiers implicit in that epithet are noteworthy: Todessehnsucht is technical and it is death metal.

Analysis: Atrocity’s Todessehnsucht (1992)
Michael Schwarz on drums initially appears to overwhelm proceedings with odd time-signatures, but closer attention reveals how inextricably tied his patterns are with individual notes, and with even Alexander Krull’s Barney Greenway-style shouts, thus forming one of the most interesting three-way musical partnerships in death metal history.

The riffs on Todessehnsucht follow many of the principles found on The Erosion Of Sanity; the differences lie beyond playing technique, and have more to do with matters of composition. Todessehnsucht is a willfully jagged album, not unlike a dressing mirror with a web of cracks running across its surface; that the reflection staring back at you is your own is recognizable, but the odd dislocations and refractions in the image conspire to make for a psychologically disconcerting effect. Such is Todessehnsucht‘s nature. Fearless of spirit, there are sections here reveling in low E string rhythmic acrobatics that portent the emergence of djent, but Atrocity subsume these theatrics without a second thought in a vibe thick with mysticism.

Verdict:
Reader polls indicate Atrocity comfortably trouncing Gorguts. Choosing between these two classics is a hopeless task, equals that they are in every way imaginable. My personal preference leans towards The Erosion Of Sanity, but that readers have opted for the less recognized album and by such a margin surely counts for something, too. Atrocity go through to Round Two.