The Wakedead Gathering – Fuscus: Strings of the Black Lyre (2016) 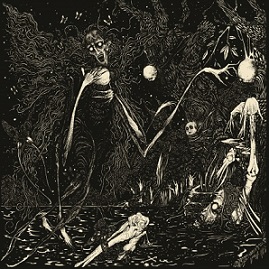 Old extreme metal bands used theme – be it death, horror, violence, or mythology – as a coloring and driving agent for their music, without it detracting from the pursuit of the music itself, with all its preset white-knuckled aggression. New extreme metal bands, on the other hand, try to bring as much of their lyrical imagery to life in their songs. Once one begins to understand this, the staccato, willfully atmospheric nature of much new metal becomes comprehensible in a new light. Newer bands attempt movie-metal, instead of simple metal, and therefore are forced, by weight of expanding interests, to invest in experiments of tone and texture.

But metal is not a movie, therefore, to introduce soundtrack-like elements, not as mere prop for interlude, but as a part of the songwriting itself, convolutes and more often than not destroys the impetus on which metal thrives. There are things to like about The Wakedead Gathering‘s latest album when they’re intent on being blackened death metal; songs have something approaching an identity, and even evoke the portentous unease that the band is after, without degenerating into the kind of unmelodic, white-noise mush that other bands frequently become. Basing its sound around the swamp theatrics of Autopsy and Incantation via old Finnish death metal (of both, Abhorrence, and Demilich strains), The Wakedead Gathering frequently uses thrash technique to pull a slow-moving part out of the morass, in the process imparting a very real will to motion to their music.

Equally frequently, however, The Wakedead Gathering let songs wander without any conceivable aim, in quest of that elusive atmosphere; what irony, however, that the band succeeds in achieving that same atmosphere when they are, in fact, being death metal proper, linear in execution, and trusting the listener to exercise his powers of imagination, to extract what he needs from the narrative, without having every twist in plot spoon-fed to him.

This entry was posted in Black Metal, Death Metal and tagged Fuscus, Strings of the Black Lyre, The Wakedead Gathering. Bookmark the permalink.

1 Response to The Wakedead Gathering – Fuscus: Strings of the Black Lyre (2016)