2066 And Then: Krautrock that saw twelve years into metal’s future 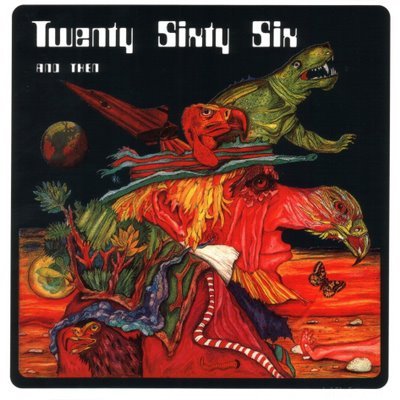 Noble metal hessians, gather your history books and tear them asunder, for 2066 And Then will challenge accepted genre narratives!

Well, don’t go so far as all that; it is after all only the one song ‘Autumn‘ and a brief thirty second segment at that, but oh what an anachronistic hammer blow to the senses it is! Slayer didn’t mine this particular niche until the Haunting The Chapel EP and ‘Chemical Warfare‘ to be precise, a full twelve years into the future. Yes, Black Sabbath‘s spot as overwhelming godfathers of heavy metal is secure. Deep Purple will still be held responsible for injecting copious quantities of neoclassical speed into it. And The Stooges will forever loiter on the fringes as the original champions of decadent attitude and punk technique, long before Motorhead came on the scene. These are things that stay sealed to dispute.

But hear ‘Autumn‘ from 1:40 till about 2:15, slide around the hammond organ that provides the core theme, and there it is, repeating twice, a resplendent firestorm of nihilistic denial and urban disenchantment; a legitimate extreme metal riff, palm-muted and downpicked with rare vehemence for its time. In more self-conscious hands, this phrase could easily develop into an all-out attack for the jugular, but 2066 And Then understandably don’t treat it as such, they never so much as insinuate a sneaky drive-by the same neighborhood again on the album. It is but part of a more elaborate narrative to them, an angry legato leading into the sort of grandiose arrangements typical of 70s progressive rock. Many textures, many moods, many overtures, but not always focused or meaningful to our acerbically-shriveled ears. Not always without reason either, it does bear to keep in mind that punk was after all a reaction to the bloat that prog rock was often prone to. Metal – in particular the cream of the NWOBHM, Metallica, Slayer themselves, and much of death/black thereafter – sought to recapitulate the ambitious, music-as-storytelling-canvas aspects of the prog rock genre while doing away with its silliness in favor of punk’s incendiary aesthetic.

Be that as it may, ‘Autumn‘ is that rare, preternatural instance of man sending his mind’s fingers into the future, unknowingly and in spite of all his conditioning and intentions to the contrary. No doubt, 2066 And Then were walking in Black Sabbath‘s formidable shadow in 1972…well, let’s call it Black Sabbath‘s penumbra instead, because Reflections On The Future shares far more with projects like Van Der Graaf Generator, Jethro Tull, and Frank Zappa‘s myriad adventures. But for just those thirty seconds, this band achieved a very real shattering of the musical time continuum. It may have been an evolutionary dead end for them, but how eerie is nature’s way of recapturing lost impetus and planting it in more virile soil.

This entry was posted in Uncategorized and tagged 2066 and then, chemical warfare, haunting the chapel, krautrock, reflections on the future, Slayer. Bookmark the permalink.