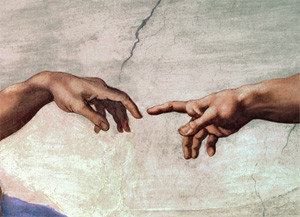 Nature contains patterns that require a specific configuration of time, space, and bent of mind to be detected. By nature I mean not only the external world around us, human beings, but also the way in which our framework of understanding this external world is constituted. Many of the things we talk about as ideals have no real existence outside the human mind; for example, a triangle has no substantial life in nature, nor do anything like morals exist in an opaque fashion in the outside world. But the processes of reasoning have their own verity, and if sufficient time and effort and conviction is exerted on a particular line of reasoning without resorting to dishonesty, then nature has a way of lending a helping hand in order to validate this process and to spur it on. The patterns which I speak of are infinite in number, and many of them are probably outside the sphere of human knowledge because of the inherent limitations in our understanding, but there are many others still that do lie under human purview and require only sincere emotion and harsh rectitude to be revealed.

The things I have listed below have happened in the last year, and can be dismissed as simple coincidence, something I would be inclined to do myself in all likelihood in a more callous mood, but bear with me anyway.

(1) At the beginning of this year, during one of my rather pronounced inebriated spells, I embarked on a Riot marathon, which culminated in me sending off a review of the reformed band’s latest album Unleash The Fire to Death Metal Underground. Riot is a band that I have held close to my heart for a very long time and the fact that the remaining members decided to carry on after Mark Reale’s death, but only after gaining permission from his octogenarian father, filled me with rare, anachronistic sentiments. Only later did I discover that the weekend of my debauchery and heightened sensitivity was the second anniversary of Reale’s passing.

(2) Around the same time, I was hearing a lot of Samael and their first three albums in particular. ‘Macabre Operetta‘ is a song of slow-burning mystical brilliance from Blood Ritual. While writing about the new Sorcier des Glaces during this period, I was caught off guard on hearing the same song covered by the Canadians in their trademark, panoramic style.

(3) Iron Maiden are a childhood favourite, as anybody who reads this blog would know, and they have retained their post as a personal spiritual hot water spring of sorts over time. No two months go by without me visiting their discography-as-shrine, and it was during one of these sprints when I lingered obsessively over the classic ‘Rime Of The Ancient Mariner‘, Coleridge’s epic poem of man versus nature done in the band’s epic style. As metal fans across the world know, Bruce Dickinson introduces this song in live settings with an exhortation against violence in case a bird, benign or otherwise, happens to take a shit on you. As luck would have it, on being called to work on a Saturday to fix an urgent production issue, riding my motorcycle and humming this same song, some bird above – probably a crow – gleefully blessed me with a warm gob of fecal matter. Needless to say, I spent the rest of the day with a shit-eating grin on my face.

(4) A reread of Fyodor Dostoevsky’s The Idiot was interspersed with watching It Follows, one of the better horror movies of recent vintage. A brief scene shows one nerdy teenager reading…you guessed it, The Idiot.

(5) The final instance is happening even as I write this. A dear friend has coaxed, cajoled, and threatened me, in equal measure, to read Robert Pirsig’s Zen And the Art Of Motorcycle Maintenance, a supposed classic of modern philosophy that I have only strictly heard of, on account of my scatterbrained reading habits. I’ve finally taken up his gauntlet but what makes this remarkable to me is that immediately preceding this task, I completed yet another slog through Immanuel Kant’s Critique Of Pure Reason, something I have attempted at periodic intervals over the last fifteen years with varying degrees of competency but whose overall premise has had great influence on my individual thinking. Midway through Zen, Pirsig draws direct reference to the same philosophical treatise with the greatest of reverence, cementing further this sense of cognitive transposition in my mind.

What does any of this mean, you ask? I can’t answer that and as I mentioned above, I’m liable to dismiss all of it as mere coincidence on a bad, apathetic day. But as also alluded to above, nature conceals patterns within her bosom, revealing them only with great reluctance and only if she comes to trust the faith posited in them.

Intuition, in the more generalized, non-Kantian sense, also includes placing oneself in the most conducive position possible to receive nature’s bounty. I like to bring in an analogy from the world of computer programming to illustrate this better. In programming languages, exception handling is a provision made to handle defective code. The coder writes a piece of code inside a “try” block, and surrounds this “try” block with “catch” blocks. The “catch” block, as the name suggests, catches any unusual occurrences or exceptions that might happen while the code or the application is running, allowing the developer to take fault-containment action.

Classical programming text books use the analogy of baseball mitts to explain exception handling. A ball is thrown from atop a terrace of a many-storied building. From each story, starting at the very top, a baseball mitt or glove of progressively greater size is held out to catch the falling baseball. It stands to reason then that the widest and the biggest glove at the very bottom has the greatest chance of catching the baseball.

In programming parlance, the bottom-most, widest glove is called the “catch-all handler”, whose use is generally discouraged because it offers little information as to the specificity of the exception. The narrower the glove, the better is the developer’s chance of isolating that which has gone wrong in his code.

However, in terms of intuition – which is really what I’m trying to get at here – the widest, bottom-most glove is the most important; not because it signifies a wide-enough net cast to trap anything and everything that happens to come its way. Far from it, for tunnel-vision and the ability to sit on a moment is of utmost importance to be able to tap into nature’s rhythms. In terms of the exception handling analogy, the bottom-most glove is synonymous with the amount of time, energy, and sincere emotion invested in an external object, the baseball in this case. These contingencies when in just the right proportion give rise to that intuitive feeling which we can sense from time to time but can rarely put a finger on, and which validates our deepest convictions and guides us on the road to further revelation.

I can honestly say that subconscious or subliminal aspects had no role in any of the five “coincidences” I have listed above. There was no deja vu involved, these things just crept up on me. But looking back on them, I arrive on a common thread linking the two objects of these experiences: there are truths I hold inseparable from me when it comes to the main “substrate” of these incidents. Riot, Iron Maiden, heavy metal in general, Dostoevsky’s exposition of time and how its gradations pertain to the human mind, and likewise Kant’s work on reason itself; I have thought and agonized over these things for a long time, and my personal gods, in turn, have signaled their approval of my probings. These are subjects worthy of being thought and agonized over, and that in many ways is its own payoff.