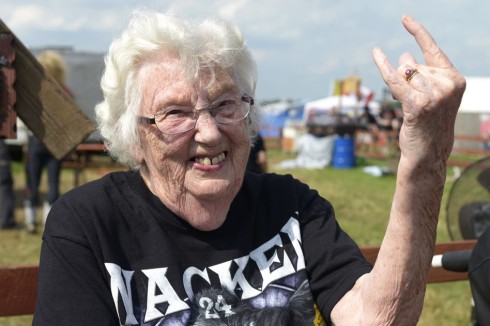 Mainstream metal publications often hype up musicians based on how affable and congenial their personalities are. Cuddly teddy-bear epithets are handed out to those who are gracious enough to grant pleasant vibe-y interviews or oblige fans with photographs (Erik Rutan: Nicest man in death metal!). Conversely, musicians that do otherwise are instantly labeled as villains and their music dragged through the muck behind them as a disgraceful exemplar of guilty by association. The domestication of metal has led to fans believing that musicians owe them absolute tithe on their souls, that musicians’ obscurest perceived transgressions, though little more than perfectly legitimate exercises in individuality, are reasons enough for revocation of their musical credentials and for public shaming.

Rampant egoism engenders the arrogant notion that the fan puts bread on the musician’s table. This in turn causes musicians to be tentative around such sensitive people lest they disrupt their supply of meal tickets. There is a commercial contract between the two parties, no doubt, but it is best to keep such lewd matters of transaction on a subliminal, unsaid level. Many musicians are inherently kind and gentle people in any case, and willing to go through these charades with good cheer, but to apply this rule to everybody is surely presumption of the rankest kind. Seeing some of the people that musicians are forced to put up a brave front for often leads me to wonder: if I could play worth a damn, if I had a band that could pull in a crowd, and if I were asked to pose and chat with a similar variety of chump or chumpess, the first thing to cross my mind would be to ask said chump or chumpess to get the fuck out of my face.

Metal is a rough and combative genre, bound to consist of at least a few – that there aren’t more is the pity – socially intransigent elements that reproduce their discontent in musical form. The depth of disingenuity is to expect the people making this beautiful, violent music to all be happy little ponies whose only purpose on this earth is to validate your existence as your mother’s precious brat. Instead, metal fans should try cultivating a little self-respect, a little honesty, and an appreciation of what should be the ideal nature of the musician-listener contract: the musician makes music, the listener compensates him slightly for the pleasure that he derives out of the music, pleasure that has the potential to last a lifetime, and there it ends. Everything else is irrelevant and should be left upon good grace and the many vicissitudes of human nature.