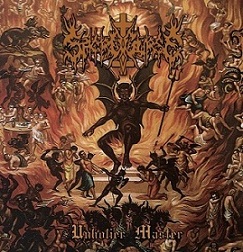 Hearing Sacrocurse‘s Unholier Master is a conflicting experience. This album carries many of the trademarks that make the modern black/death/war camp a tired cliche, but it also contains some redeeming qualities that become evident after repeated listens. To put that into proper perspective, the following is the original opening to this review:

[It is obvious on hearing Unholier Master that Sacrocurse “want” to sound the way they do. This is their – and by all accounts, plenty of others’ – idea of extreme metal, fully impervious to attack from outside. To that end, like most black/death/war metal, Unholier Master achieves its goals: this is a primitive, grindcore-influenced blast of hyperactivity with no aspirations other than a momentary blitz on the senses. There’s no point running down albums like these, so the following are simply some observations to be made on the music found here, and on the sub-genre at large.]

The observations themselves are:

How does Sacrocurse fare in these respects?