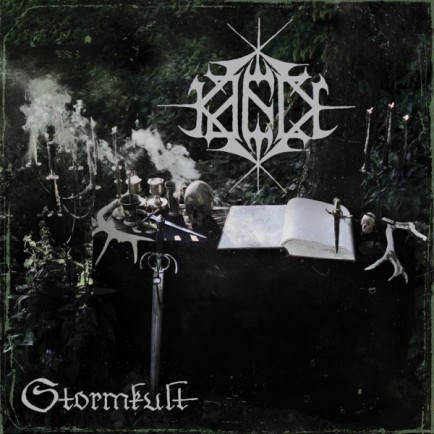 Kaeck‘s Stormkult is a bonafide black metal blitzkrieg but some of the more intriguing questions it poses exist on a level external to what’s heard on record. Emotions mature over time; hate and discontent of the mind in particular are gradually seen to work their way out of an individual’s system as and when his life attains a greater equilibrium. He might find solace in his work – day job or otherwise – and judge it as his one true calling. Or he might enter into a compatible, mutually fulfilling partnership with another person that culminates in the creation of a new human being, thus impelling him further towards self-improvement. Whatever be their medium, it is only natural, and fortunate, that these developments aid in alleviating the uncontrolled tumult of the younger, rootless mind.

Unabated vitriol can only eat away at a person in the long run but what fascinates is how certain individuals are able to channelize intensely negative feelings into a force of productivity and personal catharsis before returning to inhabit more socially acceptable skins. It is not this blog’s place to conjecture over these musicians’ personal lives or the state of affairs therein that may have led to the creation of this album. What can be said without the slightest doubt, however, is that Stormkult is an unrelentingly hateful album, amplified in intent and realization through its abundant use of dark, understated melody over a near-uniform percussive battery, and supplemented with some of the most painfully vehement vocalizations since Burzum and Antaeus‘ heyday.

Playing fast, of itself, can be a physical release like no other but it is a self-centered indulgence all the same. A note standing alone is nothing more than a vibrating frequency but music conveys feeling and meaning only through the intervals between notes, and it is here that Kaeck rise above dead-end styles like grindcore and war metal. There is an intentional lack of resolution to many of the individual phrases found on Stormkult, a practice that renders a feeling of perpetual reaching and restlessness in the music. The riffs themselves are arranged in a sort of relay formation, not unlike what Darkthrone once did, repeating bar upon bar, and eventually passing responsibility for movement to the next component in the song’s chain. Drums will initially be perceived to be monotonous, but are in fact present as mere trace elements to guide songs along on their otherwise independent trajectory.

Describing Stormkult, however, is doing it disservice for it exists to be experienced on a visceral, heart-over-intellect plane. The overwhelming impression to be gathered here is one of a band that has accessed just the right space of mind and then chosen the appropriate tools, musical and mental, to remain in that space until their vision has borne fruit. A personal grievance against much modern extreme music has been the curious absence of anything resembling genuine feeling and anger; technicality and theatricality have come to assume eminence over the stuff that makes this music extreme, and that draws an equally extreme mind to it in the first place. Kaeck make you feel their naked revulsion on what has to be one of the most spiritually purging black metal albums since Transilvanian Hunger.