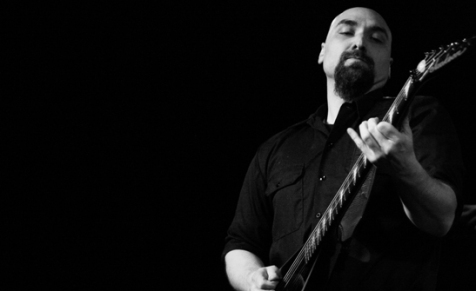 Is the guitar solo a purely ornamental aspect to metal? The more one thinks on it, the odder it seems to consider the prospect of an individual from a collective waddling forth to showcase his skills while the remainder of the band recedes into the background. Indeed if one is predisposed to an offbeat sense of humour, this presumptuousness may even seem somewhat comical. We keep harping about the primacy of songwriting in metal and how all devices within the song should ideally serve to propel the song forward to some logical destination. But what exactly does the guitar solo do?

The chords over which a guitar solo flies by rarely enhance the actual song in progress; often it becomes a guessing game to find which of the two were put together first. Melodically conscious players take pains to ensure that the solo follows the underlying chord progression intimately, its topography molded to sustain tension and achieve resolution, or that particular “cathartic” release, within the context of the progression. In the hands of truly gifted players, the guitar solo becomes an additional and distinct voice that doesn’t break touch with the song’s core but rather supplies it with greater emotional resonance.

But when the craft of composing is looked at as a whole, it becomes obvious that bands regularly “allot” a certain time and space for the guitar solo to assume place of pride. This allocation seems like an unnatural, and artificial, construct imposed on the writing process, because the relatively dead zone over which a guitar solo operates holds little intrinsic worth for the greater goal of the song. The song then lies prostrate at the mercy of the solo, relying disproportionately on the latter to rescue it from its self-inflicted impotency.

In the case of traditional heavy metal and much of speed and thrash metal, the guitar solo, exquisite and memorable though it may be, acts as a brief detour and a set-piece before the song cycle returns to its verse-chorus format, a tendency consistent with the more populist roots of heavy metal. The more extreme, ambitious forms of metal, however, ditch much of this cyclical nature; chord progressions become far more fluid, frequent, and free-form – but not in a jazz fashion – and are often drilled down to the level of individual phrases and the respective notes that they consist of. This unique assembly and perspective on composition provides the adept guitar player with the opportunity to employ the solo as an incendiary burst of spontaneous energy. The solo loses its contrived appearance and becomes one with the song as one of multiple naturally-occurring phenomena.

It is perhaps no coincidence that the three guitarists mentioned in this post’s title are the primary architects of their bands’ music. Having a personal vision and, more importantly, control over its execution, no doubt contributes greatly to the cogency of the eventual output. Each of these three men started with a fiercely individualistic orientation: musically extravagant in the case of Azagthoth and Vigna, but more sedate in Mark Shelton. As different as their styles are, all three represent primal musical instinct in its purest form; the first two through an incontrovertible severing with the old guard, devising as they did styles of soloing out of the veritable ether.

Azagthoth’s seemingly incoherent rape of the guitar neck conceals an abstract logic in concert with the chaotic, uncontrollable ideals of his chief inspiration, H.P. Lovecraft. Man’s illusion of choice and free will is just that, liable to be overwhelmed at periodic junctions by an unsensing, indiscriminate nature. Azagthoth’s brilliance lay in encapsulating in sound the disintegration of order in the world of transactions, but not just as a jumble of chromatic notes, random dissonance, and guitar effects; his real skill was to let through a sliver of logic and organization before it fell to chaos. It was almost as if he was telling the listener,”This was your life! Now watch it crumble away to nothing before your eyes!”

What Bob Vigna did was every bit as intuitive as Azagthoth, but with a far more keenly attuned musical sensibility. While the latter’s seeming disregard for convention has led to more than a few imitators, albeit almost uniformly lacking in the original’s philosophy, Vigna stands apart from virtually every other guitarist in heavy metal. Idiosyncratic to an extreme, but also unwaveringly melodic, his solos routinely threw the proverbial kitchen sink at the technician’s feet; baroque in their flourishes but with a cold eye always watching economy and relevance of movement, they remain archetypal expositions of “body solos”, the term literally signifying the thrusting of the entire physical body into the performance of the music.

Shelton, at the other end of the spectrum, is the old guard, the sentinel that doesn’t acknowledge the ravages of time. His music seems more fascinating on a certain level than his younger, genius upstarts precisely because it isn’t a music borne of genius but of an all too human vulnerability. It is a music painfully self-aware of its limitations and its lineages. Shelton’s solos rarely leave the comfortable environs of well-traveled pentatonic models, but their beauty is found not in the novelty of individual components but in how they are chained together, piece-to-piece, in a vivid realization of proximate, musical cause-and-effect.