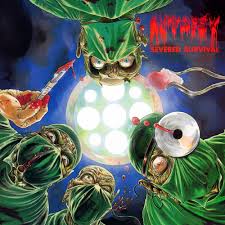 It is often forgotten that Chris Reifert drummed on the first Death full length before going on to form the hugely influential Autopsy. Severed Survival has always seemed a companion album to Scream Bloody Gore, and while a certain amount of osmosis was inevitable considering their shared history, there still are significant differences between these two seminal records. Both carry enormous weight of reputation, unwarranted in the case of the Death album according to some. It should be remembered that Scream Bloody Gore came out a whole two years before Severed Survival, but chronology can be used in its defense for only so long; bands as diverse as Morbid Angel, Nuclear Death, Sepultura, Insanity, and Necrovore were turning graves in the death metal underground by 1987, making music that was far more adventurous than Scream Bloody Gore.

Scream Bloody Gore is overrated, about that there can be no question. Death and its founder have developed a messianic complex posthumously, especially among those with only a cursory interest in the death metal underground. The development of personality cults in a style of music as attritional as death metal or black metal is generally a sure sign of the wrong set of people being attracted to the music, and, by association, for the wrong set of reasons.

Riders like underground metal carry far more loaded connotations than can be gauged by simple appraisal of musical qualities. The underground is a state of mind; if one says that they love underground music, or an underground anything related to the arts or thought, really, then it stands to reason that they as a person have rejected the mass-produced, steroid-inflated thoughtfeed that mainstream culture regularly shoves down their throats. They automatically gravitate towards that which falls outside the pale of the contemporary status quo, not because it is the hip thing to do, but because of an instinctual summons to a greater knowledge that lies occluded by mainstream propaganda.

If this is the true definition of what an underground mindset should be, then it becomes glaringly obvious why making mortal men into gods does not belong in underground extreme metal. Fawning hero worship is for sheep, not for those on the same path to self discovery, albeit separated from one another and from an eventual destination if such a thing exists, by varying distances.

Keeping Schuldiner’s apotheosis at bay, then, is Scream Bloody Gore a bad album? And how does it compare with Severed Survival?

Both albums use the same crude palette that was available to middle-of-the-road metal technicians, as these people unabashedly were then; near-identical vocals and generally similar tremolo-picked patterns from the fledgling years of death metal contribute to an original impression of shared origins. But hear closer and it becomes obvious that the songs on Severed Survival are constructed with far greater ambition, individuality, attention to variation, and atmosphere. Severed Survival thinks of itself as a death metal album and employs whatever tools it possesses in its limited arsenal to achieve a sum greater than its parts. There is unbridled aggression here, no doubt, but there also is calculated menace and a desire to convey inter and intra-song progression, with sophisticated melody often sewn into the cellular structure of each song. Far too often, Autopsy‘s gore-soaked reputation overwhelms the skill of arrangement found on their first two albums; Severed Survival is an exemplar of what can be wrought with slightly above adequate technical skills fired by a morbidly creative imagination. 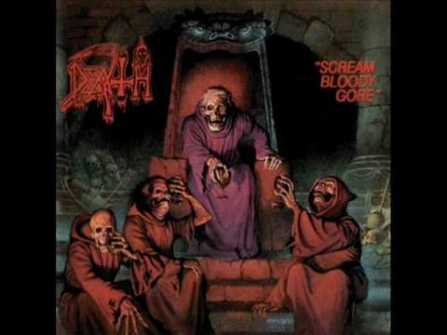 Scream Bloody Gore‘s idea of atmosphere mostly comes from memorable intros – and it must be said that some of these are truly timeless – and big, arresting chord progressions. But where the songs on Severed Survival are aware of the seething potential within death metal, and use all of their available body for propagating that idea, Scream Bloody Gore is still trapped in good ol’ thrash and speed tropes. Mostly everything between intro and the next big open chord fix is monochromatic filler, played at similarly fast speeds, and hence indistinguishable from one another. This makes Scream Bloody Gore an album of waiting for the next cool moment, again more a hallmark of riff-obsessed thrash than death metal. With due credit, Schuldiner delivers abundantly on this front and with a youthful anger that elevates these songs above their less than ideal composition.

None of this, however, necessarily makes Scream Bloody Gore a bad album, just not a great one.There is a visceral element and a recklessness about it that persists to this day, something Schuldiner would progressively lose for greater instrumental competency. There is palpable sincerity also, an important quality to consider while judging death metal from the dreamtime of the genre. As it stands, Scream Bloody Gore is an imperfect, enthusiastic but still proud part of death metal’s heritage.