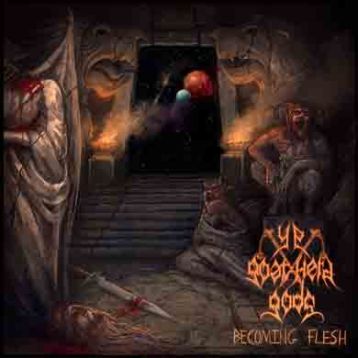 Approach and leave Becoming Flesh behind as you would a heavy metal album, and an elegant, if not exactly visceral, impression is bound to linger. Techniques embedded at the crossroads between standard 80s speed riffing and the more fluid tremolo-based excursions of ensuing black metal are employed on this album, however they don’t conceal the fact that Ye Goat-Herd Gods are equally, if not more so, fond of traditional heavy metal. Consistent melodic development is the band’s focus, found in two flavors regularly alternating between an unabashedly retro sound and slightly grimmer leanings, but only just.

The paradox here is the use of speed metal riffing minus much of the speed. The standard template of this technique, in the metal repertoire ever since Metallica innovated it in the early 80s, is a palm-muted and steadily down-picked/alternate-picked bass string over which ride open chords, giving the riff its punctuation and primary source of melody. When played at fast enough speeds, the space between these open chords occupied by the chugging low string is attenuated drastically, creating an impression of seamless melody in the listener’s mind.

Ye Goat-Herd Gods favour an epic style of delivery, however, they play it like a speed metal band at middle-of-the-road tempos. In doing so, they fall in a no-mans land that robs many of these admittedly well-written songs of the vitality that they deserve. Which is a pity because this band knows how to write a melodic line without resorting to cheap tricks, but for them to create a truly resonant album, they have to pitch their lots appropriately; either ditch the pretension to extremity entirely and embrace who they are as fans, or make the adjustments necessary to technique and writing to realize their music with greater energy.