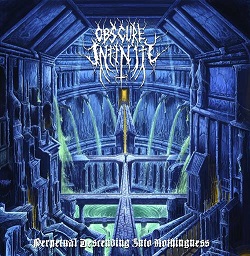 The Hellion-style intro to Perpetual Descending Into Nothingness may be misleading but Obscure Infinity are a death metal band that one can honestly get behind without compunction. This is a style of death metal that is familiar without being a direct ode to any one band. Like the Faithxtractor album from last year, Obscure Infinity combine elements from a host of influences ranging from Monstrosity to Fleshcrawl while simultaneously weaving an atmospheric aesthetic into their music reminiscent of a band like Necrophobic. Most importantly, this band eschews all modern theatrics, instead relying on timeless, workmanlike ideals of solid songwriting.

There is barely a discordant note to be found here. Songs show tremendous internal consistency in logic; Obscure Infinity strike one as a band that approach writing music from a high-level perspective. These are not random assemblages of cool patterns happened upon while fiddling around with an instrument but are actual songs with skeleton and preliminary tissue conceived inside the mind, and only then fleshed out as the journey unravels and undulates over a terrain which, while charted, still reveals unexpected sideways and hidden trails.

There is an epicness lurking underneath much of Perpetual Descending Into Nothingness, an ambition that is rarely if ever seen in modern death metal bands. Obscure Infinity‘s wisdom however lies in how they keep leash on these moments of transcendence, preventing them from becoming a cheap gimmick. A European melodic, neoclassical sensibility infuses this music with a freshness and a scale of magnitude that lies beyond the pale of comprehension of the many clone bands cluttering metal today. Obscure Infinity leap into the fray and reduce all competition to insignificance with what, to these ears, is one of the finest and most maturely realised death metal albums of the last ten years.

This entry was posted in Uncategorized and tagged death metal, germany, Obscure Infinity, Perpetual Descending Into Nothingness. Bookmark the permalink.