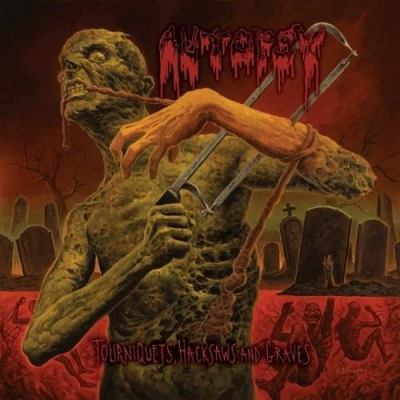 Legendary old school band Autopsy show young upstarts a thing or two on their third post-reunion album. Working within a limited template consisting of at least 30% punk variants and utterly unpretentious, grave-robbing death metal making up the rest, Autopsy still utilize it to the fullest, creating a perpetually busy yet atmospheric album deep into their careers. There are times when the band veers off tried and trusted roads to incorporate the irreverence that characterized their ouevre on Shitfun and in side-project Abscess, and also, more questionably, pentatonic antics and sluggish doom sections that wouldn’t be out of place on a deep-fried stoner metal album. But these adventures generally come off with the confidence that one expects from scene veterans. Autopsy are trying for the aural equivalent of a grainy, backwoods brutality horror film here so this works well as soundtrack to images from Deliverance or The Texas Chainsaw Massacre.

And ultimately, that is the most we can expect from a band like Autopsy today. The works universally considered as their best had the advantage of the unique spot in time they occupied, but to the attentive listener, it should be obvious that there is scarce room for expansion in what is an influential but also basic style of death metal. Autopsy counter by borrowing from various times in their own history while adding a few new elements to spice up this festering mix. The tongue-in-cheek playfulness of Severed Survival is left behind for the darker, more crushing sound that was developed on the second and third efforts. There is greater use of melody now, primarily by way of a more liberal use of bright, lead guitar breaks. Chris Reifert exhorts his charges with the gravel-throated zeal of the reanimated undead, all the while maintaining studied sloppiness on the drums.

The store of memorable riffs is nowhere as abundant as it once was, but Autopsy haven’t lost their ability to knit together coherent songs with logical interplay between their individual components. Tempos are mixed up nicely but always in the service of atmosphere, and never gratuitously or for lack of inspiration. Tourniquets, Hacksaws And Graves is dynamically rich, and carries a sense of greater narrative unfolding over undulating terrain, littered with appropriate crests, troughs and the odd bear-trap. High-brow, though, this certainly isn’t; all around is thorny brush and tortured screams with no idyllic dale in sight.

This entry was posted in Death Metal and tagged autopsy, death metal, Hacksaws And Graves, Tourniquets. Bookmark the permalink.