Post-Symphonies Of Sickness Carcass is redundant 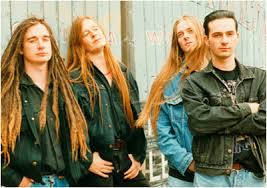 On Reek Of Putrefaction, British band Carcass made a statement that has resonated through extreme music for almost two decades. Every goregrind band – and by direct correlation, underground metal-related music in general – owes a debt of gratitude to the path that Carcass carved out in 1988, a path distinctly different from the hardcore-heavy grindcore of contemporaries Napalm Death. Carcass‘s riffwork, accentuated by Ken Owen’s sloppy but unique drumming, owed as much to heavy metal and Slayer-like riffing as it did to fast power chord motion. The band also had the power of conviction in their court then; veganism may be self righteous to a fault, may even seem a bit comical to people who’ve been reared as meat-eaters and keep having images of decapitated pig heads shoved in their faces, but Carcass went about advocating their stance with consummate humour. Dismembered and strewn about as insentient hunks of flesh, life loses its dignity in a natural world unconcerned with human morality, reminding us that we haven’t come as far from our constituent origins as we’d like to imagine and we don’t have long to go before the imminent return.

Reek Of Putrefaction sounds pugilistic and vital to this day. A genuinely iconoclastic album and the voice of young rage, it is what Carcass should have always been. The follow-up Symphonies Of Sickness simplified, or elaborated, based on the listener’s take, on this template. Cleaning up their sound and upping the metal-isms, incorporating semi-melodic structures, even reducing use of the infamous pitch-shifter in vocals, Carcass set the groundwork for what was to follow. Symphonies Of Sickness is still an invigorating listen, with some of the more memorable songwriting to be encountered in this particular spot on the underbelly of extreme metal. But it isn’t purely grindcore and it isn’t purely goregrind; it ended up becoming a blueprint for a host of goregrind bands, especially in their later years, from Haemorrhage to Regurgitate, but the viciousness of the previous album was lost forever and never to be regained. It is a fine album for what it is, and even maintains the amusing fascination for medical pathology in lyrics, but there is more space between notes here, and a cold and finely-wrought calculation to the music. In hindsight, yes, this is where Carcass graduated from the noise of their debut to making more conventional heavy “music”, but that does not feel as much of a progression as it should.

However, for a band to go from what they were and where they were, even as recently as their somewhat more considered sophomore recording, to Necroticism – Descanting The Insalubrious and beyond,  reeks of…well, a huge wad of sell-out. Carcass craved corporate and public acceptance, and they found it in droves. The band brought in noted rock star guitarist Michael Amott to sugar up their music beyond all recognition, in hopes of tapping into a market far different from the one where they’d originally made their name. The band has confessed to as much in interviews from the time, even disowning their immediate past as musings of bored, morbid-minded teenagers. Carcass decided to play catchy rock music for the remainder of their careers and in doing so took a giant shit on their legacy. The modern metal fan identifies the band more with the watered-down fare of their later years; the first two albums are stowed away somewhere in the dusty cellar: “oh yeah, those, teeheee, so musically immature! I just don’t know what they were thinking!”

And now they’re coming to Mumbai, India to adulterate minds that need no more adulteration. Someone ought to pelt them with reeking tomatoes.