Death Metal from the tombs: Blaspherian and Imprecation 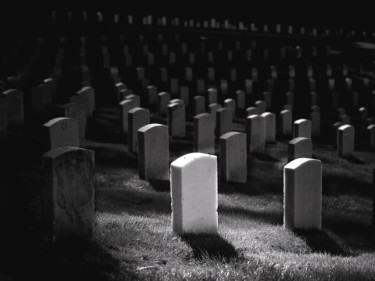 These two American bands comprise the very best in sepulchral death metal in existence today. Both play a style native to the North American continent, owing a large debt of gratitude to the atonal, chromatic forms first put forth by the likes of Incantation, Havohej, and Immolation. Far removed from the gratuitous display of soulless virtuosity that finds room in modern metal publications and small talk, these bands hearken to a pioneering spirit of the frontiers, when death metal meant both a negation and an affirmation of life itself, vehemently opposed to any sort of compromise in sound, vision, or content, and offering no consolation whatsoever to lepers “into” the music for the wrong reasons. Where Blaspherian exhibit a beautifully evolving logic based on liquid progressions, Imprecation are a little choppier, exercising strong control over conventional punctuation and punch.

Blaspherian‘s approach can be likened to a sort of musical domino effect; it is fun trying to trace back these riffs to their first cause, each movement only related in a naturally cascading manner to its immediate predecessor. Little more than standard exercises in death metal dissonance and alternate picking as standalones, they add up to the eventual muscular cohesiveness of these songs, much in the spirit of progenitors Immolation. Shorn of almost all ornamentation and hook devices, Blaspherian put the listener to the rack, demanding their unbridled attention before revealing the structural integrity of their music. Unlike traditional metal, and even some popular death metal staples, there are no easy refrains or choruses to be found on these songs; their perpetuating motion in many ways is emblematic of life’s tenacity to persist in the face of unlikely odds by whatever means necessary, to live in the present and look to the future but with the past as a a constant angel of temperance and course correction. 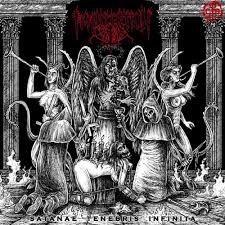 Imprecation seem louder and far more confrontational than Blaspherian. Boasting a stronger sense of groove and a tighter grasp over instrumental dynamics, Satanae Tenebris Infinita is somewhat less abstract, opting for a relatively streamlined sound with semi-predictable but always precise progressions. As opposed to Blaspherian, this is music rooted in the moment, employing every tool at its disposal to gain the listener’s undivided focus and loath to relinquish it for the remainder of the song. It holds to remember that Imprecation are not a new band, having been around in the early 90s when the lines between genres bled through a lot more easily. This album is METAL above all else, entailing everything that is good about our style of music. Remarkably adrenalizing and memorable, Imprecation could very well be the most relevant band from the old guard on active duty today. (Read more about Imprecation’s Satanae Tenebris Infinita )